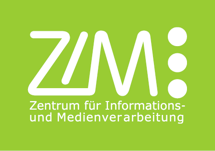 The Audio-Visual Mediacenter (AVMZ) as well as the University's Computing Department (HRZ) will merge and being known as the Center for Information-and Mediaprocessing (in German: Zentrum für Informations- und Medienverarbeitung (ZIM)) as from the 1st of september. This conclusion has been made by the rectorate because of the increasing digitalisation and interconnection of all media types and areas.

The ZIM's supervisors will be the present head of the HRZ Dr. Karl-Wilhelm Schulte and his representative will be Dipl.-Ing. Robert Schneider.

Both establishments have already worked closely together prior to the fusion. The goal is to achieve further synergy- and rationalisationeffects. Idle ressources will not be cutback but are planned to provide services such as training courses, support and e-learning. User support and lending activities (software) will be managed by the ZIM-office in the near future. The technical know-how of the computing, as well as the media-didactical competence of the Mediacenter could not complement each other in any better way.

The ZIM adopts tasks, funds and associates of hitherto units. The duties of the ZIM also include the operation of central server solutions from web-servers up to computer-clusters, operation of workstations like the Internet Cafxe9 or CAD-workstations for our engineers, the media-services featuring audio-,video and posterproduction, the operation of the university network including Internet connection and Wirless-LAN, user support via the 1st level support center(Benutzerberatung) together with the disposal of software up to media- and hardware rentals, user training, e-teaching and much more.

E-Teaching personates the centroid of the ZIM. The BU (Bergische Universität) has been awarded by the state of NRW and the Bertelsmann Stiftung for being qualified as a sample "e-teaching&university". The experiences which were gained will be converted and will be used on a well spread basis, whereas the technical expertise in running a web-infrastructure are present.